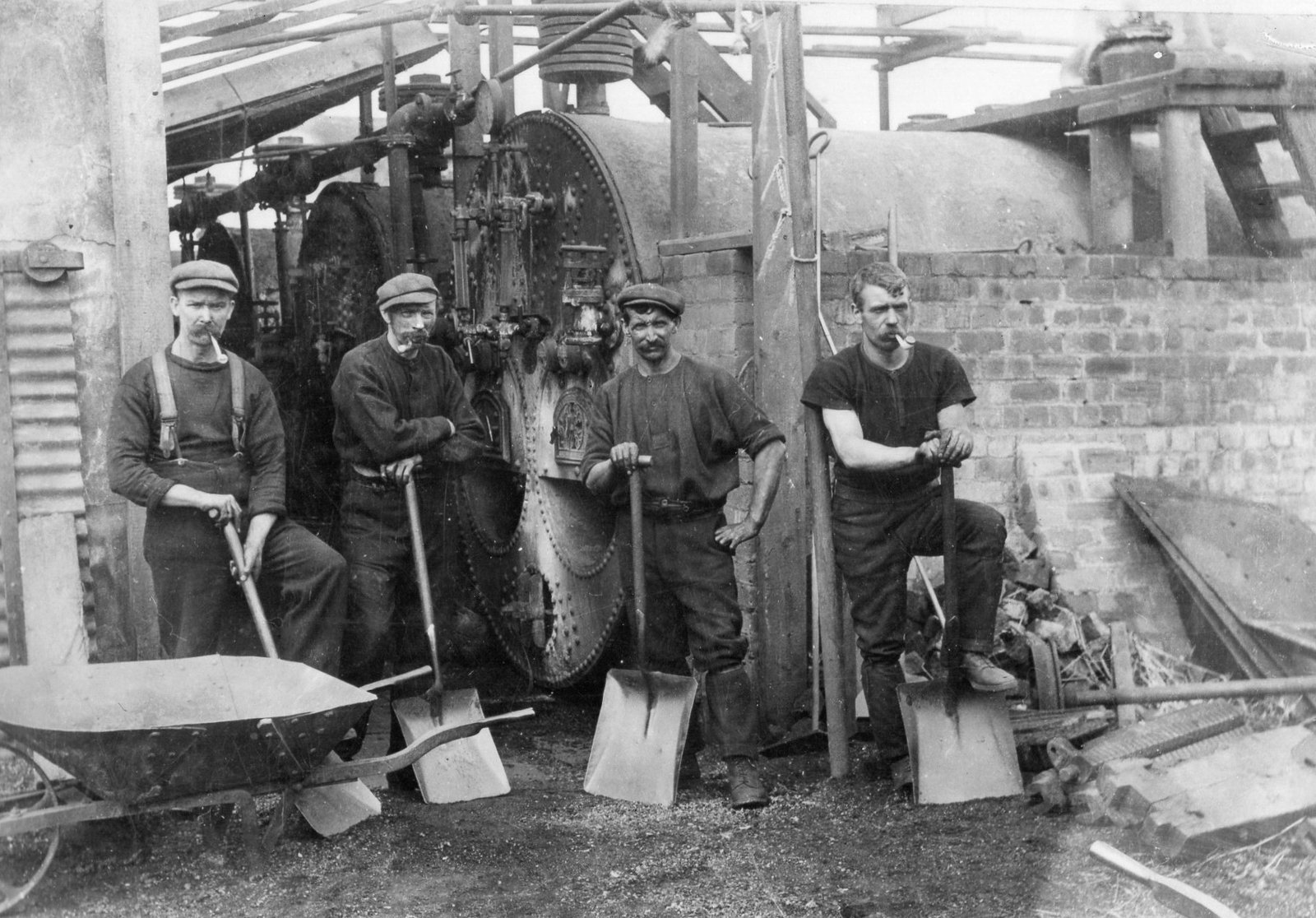 Sounds as if you are gardening – digging, burning and tipping but that’s what shaped Winchburgh, and the area around it. Mining shale, heating it up to release oil and then building the great tips of waste shale at Niddry, Faucheldean and Greendykes.

"The village almost rotated round the shale mines, and those hooters went in the morning... Everybody knew everybody — you knew the time of the hooters."

You can see how close the oil works was to the village. If you stand in the Golf Club car park you are at the edge of the oilworks site. The Community Centre and bowling club were originally built by the oil company. Shale built Winchburgh but the only signs of it are the tips of spent shale that overlook the village. 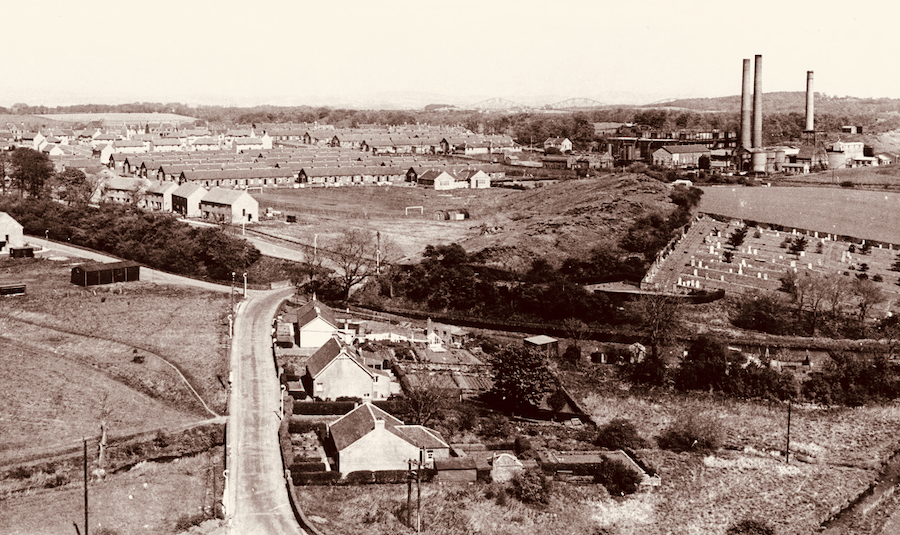 As you walk south from Winchburgh along the canal, remember that the village was surrounded by shale pits accessing deeper seams under your feet. Think about the men who worked below you. Hopetoun No. 35 pit (c1896-1958), also known as Glendevon No.6, was producing over 135 000 tons of oil shale in 1938. Several of these mines linked up underground. Railway lines connected the mines to the oil works at Niddry and Hopetoun. The massive Greendykes tip grew from Hopetoun Oilworks and gradually merged with the smaller earlier tips. 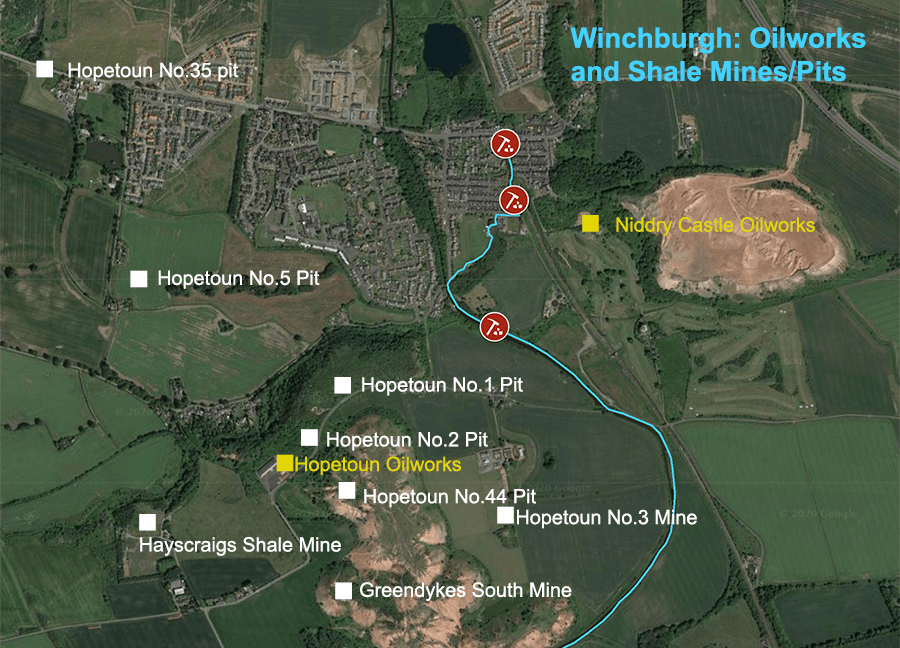 Past Oilworks and Mines/Pits close to Winchburgh, superimposed on a Google Map. Source: Written in Film 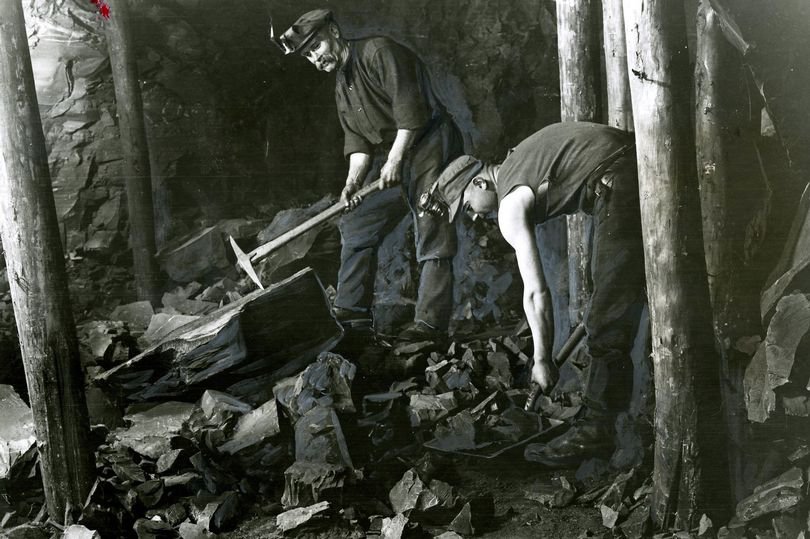 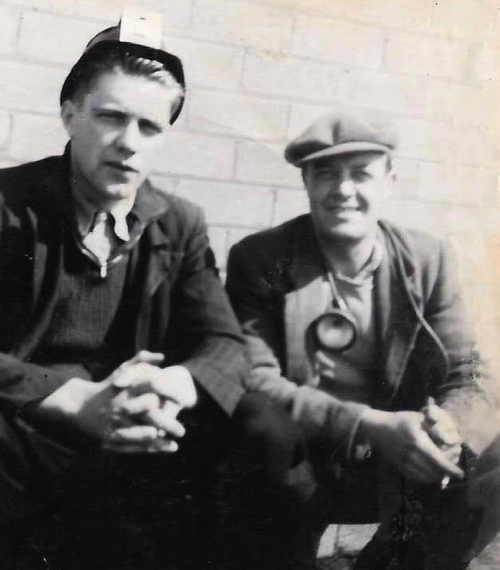 Patrick Sonny D'Alton was one of Winchburgh's last shale miners. He followed his grandfather and father into the mines. We are descended from Irish family who came over in the mid 1800’s. Patrick left school at 14 years of age as his father had secured him a job working in the shale mines. He worked as an underground driller at Philpstoun No 6 (Whitequarries). As you can imagine, it was hard work for a young boy. He worked there till the mine closed in 1962. He later suffered from vibration white finger.

"He loved Winchburgh. loved his stories of the days he left school at 14. The family came over from Ireland to mine the shale. His father John secured him a job down the mine. He was a driller at the shale face. My dad talked about the big pieces of bread with jam or meat - eating them in his shale dust hands - shaking with hunger after doing hard work . Striking up a bond with all the miners at White Quarries pit and how the pit bus picked the men up bottom of Niddry road to take them to the pit . Washing at the baths getting the shale dust off them." Peter D'Alton, Patrick's son.

Niddry Castle oilworks was very modern and efficient when it was built at the turn of the twentieth century. Electricity was used for much of the work and for the mineral railway lines that carried the shale to the works. It exploited untapped reserves of shale below the Hopetoun Estate. The work was hot and heavy, and still relied on muscle to do the hard work. Patrick Gallagher, an Irishman who came to work in the shale industry, tells that the men taking burnt shale out of the retort would drink at least half a gallon of water every three hours but it just ran out of them as sweat. 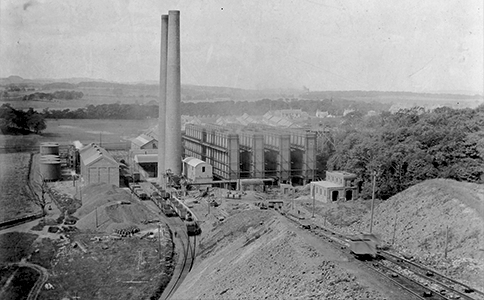 Niddry Castle Oilworks c1910 including the retorts, the bing and housing in the background. Source: Almond Valley Heritage Trust 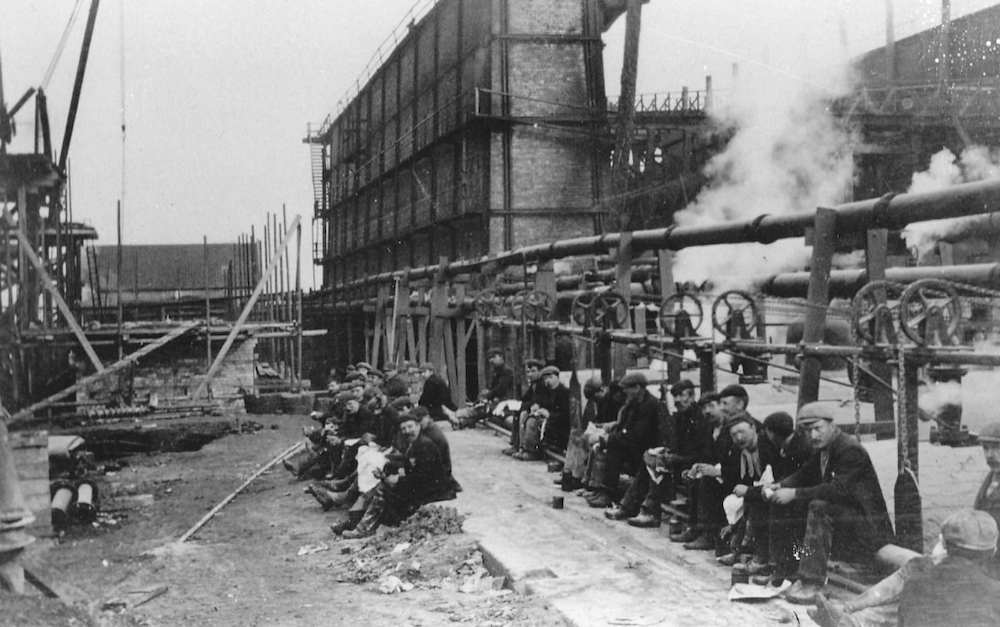 Crucial to linking the pits to the oilworks were the railways, and Niddry Castle used electric engines imported from the USA in 1902. The two locomotives were cutting edge technology, known as electric pugs; possibly named so because they are squat nosed like a pug dog, but also perhaps from Scots meaning like a monkey, or ugly. These were little shunting engines that pulled the wagons and hutches. The railway carried shale from the pits, and miners to their work, for over half a century. You can still trace some of the railway lines on aerial photos and there is a cutting passing beneath Winchburgh Main Street just beyond the allotments at the east end of the village. (The main Edinburgh Glasgow line runs in tunnel some 30m below the Community Garden) Older villagers call the railway the “loakey line”. Loakey is short for locomotive. 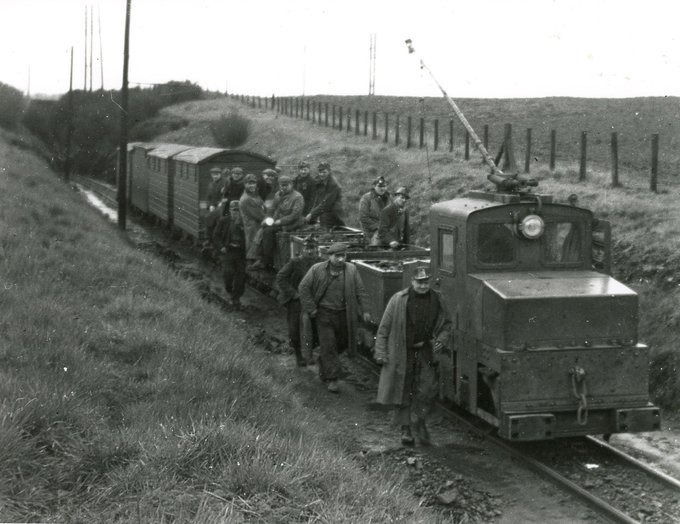 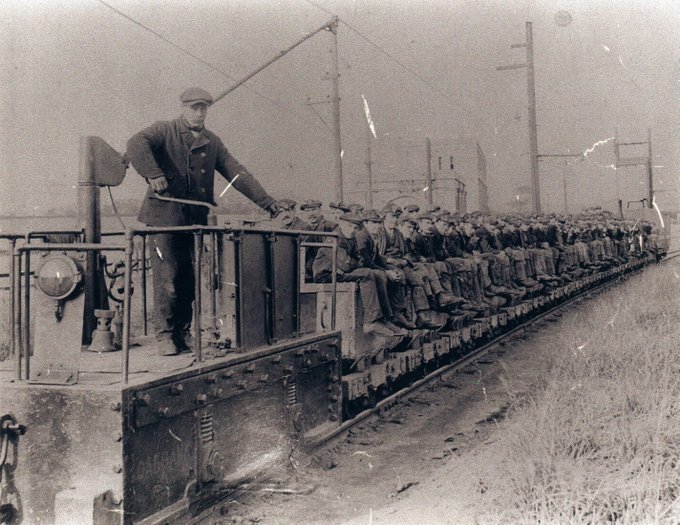 How the Mighty are Fallen

The end of the oil works, and the digging, burning and tipping, was quite quick. Hopetoun Oilworks was demolished in 1952, and Niddry Castle Oilworks in 1963. Some of you may remember it. Looking at the photos of men standing next to the fallen pieces of Hopetoun is like seeing the photos of excavations of huge Egyptian statues, the fallen remains of something that was once hugely important and now disappeared. 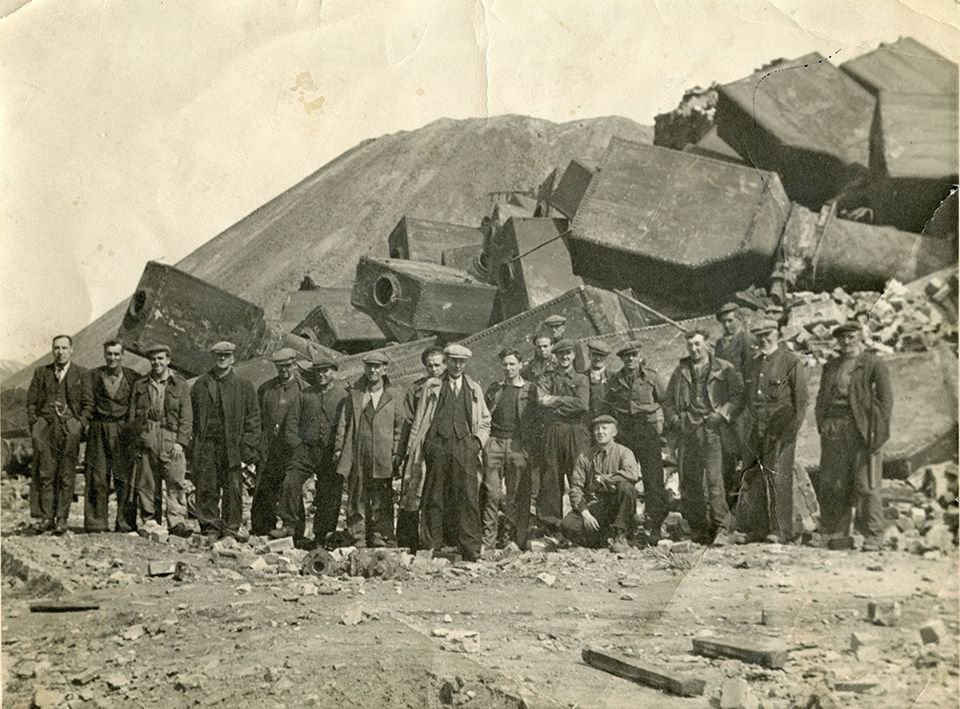 “My grandmother had a shop in the Rows, it opened 10 in the morning to 10 at night every day. Everybody went and would stand outside and you could stand and look in the window. They were always open late at night, you could go late at night and see. It went on a long time.”

Although the story of shale is often told through the men who worked in the hard and dangerous industry, shale is also about the women and families who made it possible and who helped to shape the communities around the oil industry. In Winchburgh, there were ‘sweetie shops’ run by miners’ widows. The Oil company, that owned the houses in the miners’ “raws” allowed the widows to run sweet shops from their homes. This of course meant that they also kept their houses. 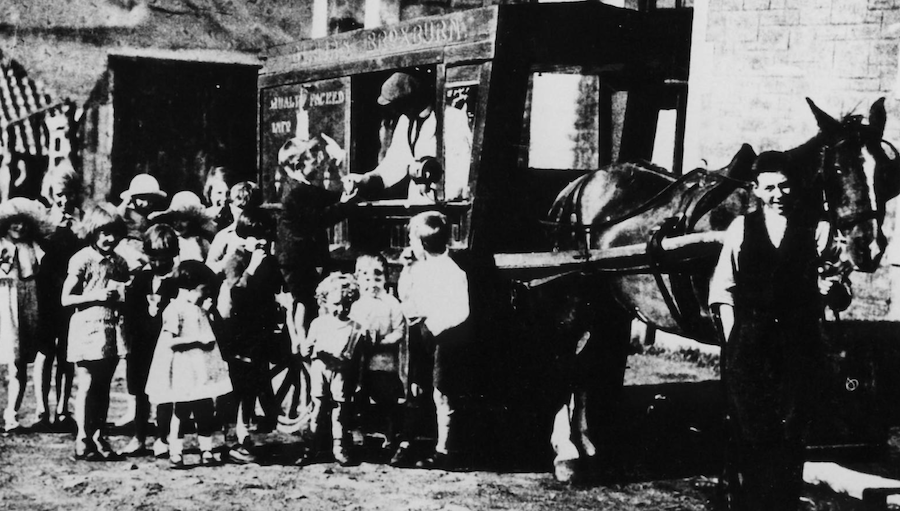 Blair's chip-cart at Broxburn, 1920s, probably at Stewartfield. In the cart serving chips, you can see Tom Blair. The boy getting the chips is Thomas Blair and the boy standing next to the horse is Alex Blair. Also in the picture are Catherine, Nessie, Chrissie and Annie Blair. Source: West Lothian Museum Service